ITS BEEN A WHILE HEY,LETS CELEBRATE THE LAST DAY OF THE YEAR 2013.DONK DRINK N DRIVE.ALL THE BEST.

Thank you guys for approval of my membership request i think we will help each other to develop our youth through sport, hopefully my team( Apel Swallows) will grow stronger

Thank you guys for approval of my membership request

i think we will help each other to develop our youth through sport, hopefully my team( Apel Swallows) will grow stronger

First of all i thank God for i have seen this day, may you all enjoy your day. Today we celebrate the birth of Son of Man (Jesus). We have every right to be happy....to act crazy, but normal. I am very happy today....haaaaaaaapy....yooooo....haaaaaapy.

It would be better for those who know good JOKES to share them with us, because we have every right to be happy. May God be with you all. GE NIET JOU DAAG everyone.

Thax youthzones for bringing hope in the life of Mzanzi youth. Steelpoort Under 16 tournament is succeful and rocking. Siyabulela

hi youthzones family i would to thank u for everything in paticular and all the necessary particular things you;v done for me and the rest of the team may lord almighty Bless you and give you many mo…

hi youthzones family i would to thank u for everything in paticular and all the necessary particular things you;v done for me and the rest of the team may lord almighty Bless you and give you many more years to conquer continue helping peopleThank you very Much

Eyethu united have been handed a new Samsung S3 laptop from youthzones , on behalf on amajita I have accepted it.

Youthzones is growing in all different angles 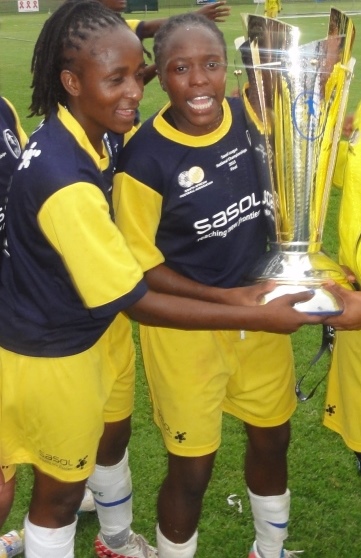 This is result of hard working...one of Youthzones trainer Lungile Mthethwa also Mamelodi Sundowns Ladies team captain celebrating with her team mates after winning the 5th edition of Sasol National play-offs and they became South African womens football champions 2013 for the first time. We really happy for her because this is the first achievement in her…

IT'S GOOD TO GIVE THANKS 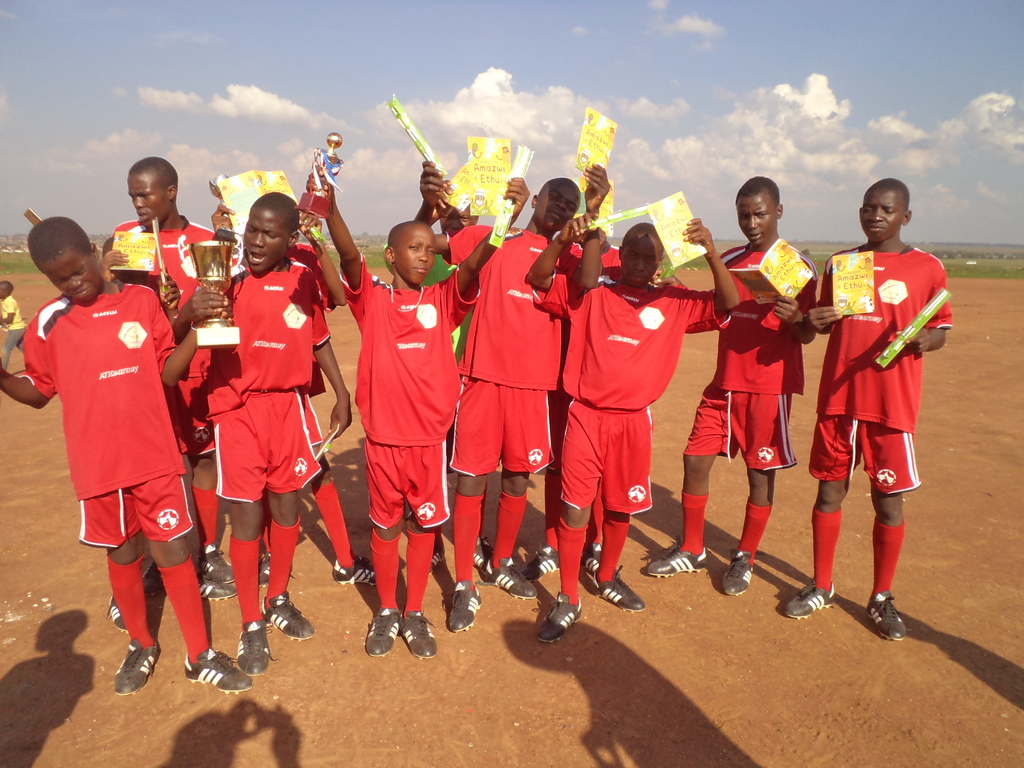 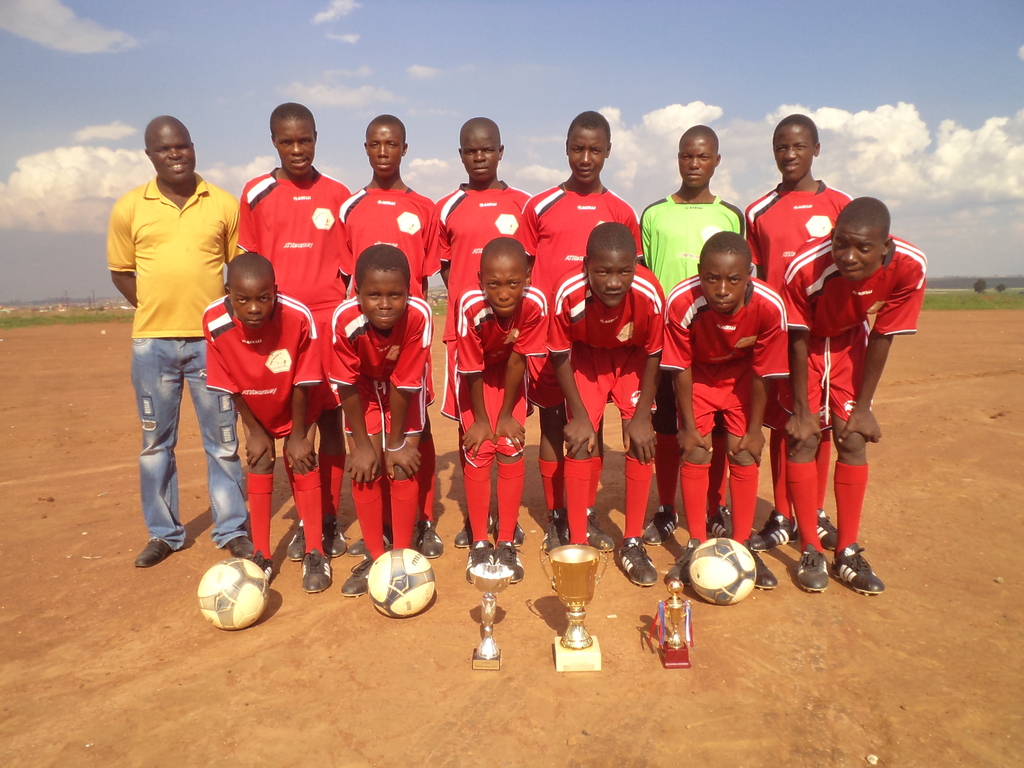 Hi Youthzones family. We firstly want to thank Youthzones and ATKearney for giving us the soccer Jersey(kit) and stationary for the kids. Youthzones we as Gabon Survivors still don't know what to say. You made impossibilities become…

It is again an honor and a priviledge to thank Youthzones and all the staff of youthzones and Xstrata for the prosperous year and the impact and transformation you brought this year into our lives. I thank you on behalf of all the Sites and the individual representatives of the sites from Rustenburg Site all the way to Manica. It is a year to remember because you guys came to our lives unexpectedly and inspire,transform,motivate,encourage,empower,uplift and mostly helping us to work more… Continue

I had travel to Mpumalanga to meet some of the guys we working with and it was such an honour to have met the guys. My most highlight in meeting them and had the previlege of spending time with them were people from Kamaqhekeza, i had learned so much from them humility especially and respecting everyone equally. They are welcoming and work with great pride.

Not only have i learned something but i took some valuable lesson to use personally, and i am sure to practise them just so i…

The power of education in sport

on friday i had a priviledge to go attend the media briefing in lucas masterpieces moripe stadium organised by lucas moripe foundation,i was invited i went there with my camera and the recorder that i was having to go and capture all that was going on in there, i was not alone i went there with a friend of…

Mamas coming together to play football in Nkomazi

It was amazing to see mamas coming from different provinces and cultures and play football against each other. They became great friends, sharing numbers and for them seeing other mamas from different places from each other having the same passion, one could see in their facial expression how happy they were. They did formal life skill sessionon listening, communication and gossiping as a group. They enjoyed their football, danced together and shared the contacts. The teams were Montana FC…

Today, on 06 December 2013,we are walking up with the shocking news of the  Death of Doctor Nelson Holihlahla Mandela.  The 95 years old father(father of the nation), is passed away yersterday   the …

Today, on 06 December 2013,we are walking up with the shocking news of the  Death of Doctor Nelson Holihlahla Mandela.

The 95 years old father(father of the nation), is passed away yersterday   the momerable many, the man who is positive attitude all the time the man who was loved the people and childrens, This man who was amazing through changed history of South Africa and bought democracy to the nation.

Our thought are with the family, frainds, South African people, millions…

Thank God i made it

Wooooooooooo i made it i'm going to Grade 11 next year. I now understand the meaning of having good friends by your side, giving you advises, guiding you and supporting you in every situation you come across. Though I come from a very disadvantaged family i didn't let that affect my concentration on my studies, i was focused and determined to make it this year, and i did it. All this happened because of the courage i got. I was convinced that i can change the situation of my Mother and my…

I SCRUMBLE,I FALL,WAKE UP AND THANK GOD FOR GIVING ME ANOTHER CHANCE

a spell caster and native healer trained in the ancient art of spiritual and psychic healing by my forefathers who have been healing generations through the centuries past and present. I have the ability to tackle all issues good and bad to enable you change the course of your fate and destiny. I can cast spells,............ perform rituals, and connect you to the metaphysical and spiritual world to enable you talk to or appease your ancestors bringing you peace of mind, success, joy and…

Yesterday marked the beginning of a great journey for South African Sport in general and the children in particular. The Laureus YES leaders of 2013 were officially graduating from the first level and second level of the programme; this initiative started in 2012 with only 11 youth leaders from all over South Africa whom are using sport to initiate social change, something to be commended because it has been a rare commodity in our country. This life changing event was held at the…

15 - 20 people needed for call centre positions in PTA - min requirements - Gr12, able to speak eng, african language and Afr (a must). Very well spoken people needed. Let me know if you Interested by 2pm today so i can make a plan for you... No exp needed. 6.5k

My email address is Tsekosambo@gmail.com

Out of all the hardwork that Kgahliso aka General displayed in the community of stoffel park and his ability to network with the purpose of enriching himself and also to get a job to sustain himself.

when protea coin came to stoffel park to open the super shack that they builded he used this as an opportunity to network with the people to get a job in protea coin he got a business card from one of the directors from the company, with him loving to communicate with people he emailed…