In South Africa we sometimes call a present a prezi, and now the real Prezi became a present!

Youthzones members can be delighted with the fantastic news that we will receive 33 Prezi licenses for free from Prezi themselves! The licenses are worth R 36 729 per annum, which makes a fantastic resource available to ordinary citizens. "This type of collaboration is…

Today while working on my admin work in Mutare site, I just had a Skype call from one of my best friends from Mozambique Americo Chauque. Only for him to know that I am just across the border in Zim. He then said he will be crossing the border to catch up. Networking either Facebook, Skype, youthzones website, emails, texts, just solves problems.…

Yes it's true, Doc and Simon are in the house!!!!! Exactly on the 17th of January this year, I wrote about the resurrection of Mutare after their visit. Today, 5 months later, this hardworking pair is here again. We are proud to say Mutare has been very live and kicking. We are so excited that we received a lovely TV set and DVD for our Mindset programs. It's so humbling and uplifting to be considered by Youthzones considering our geographical position. We feel so much loved such that our…

One piece of log creates a small fire, adequate to warm you up, add just a few more pieces to blast an immense bonfire, large enough to warm up your entire circle of friends; needless to say that individuality counts but team work dynamites...A group becomes a team when each member is sure enough of himself and his contribution to praise the skills of the others. As youth we have to work and attain great in our Lives.

It is important to know where you are going than to see how far you need to get there. In life, there is a time to let things happen and a time to make things happen. Unnecessary haste not only puts you under pressure, it also makes you run faster than God and that ultimately results in disaster. Life is in season, which means we are to do different things at different times. Always listening to God before you take a step. . . Of what good is running if you're headed in the wrong direction?…

When it all started I had no idea what to expect, boy I was in for a suprise. First day we collected leaders from arround South Africa and my friend from Zimbabwe (Teremai) and the last one to arrive was Scara from Upington. What a joy it was to see new friendly faces ad as for me, I knew a few people already i.e. Tumelo (JF), Mondli (Umlazi), The coach Katlehong and obviously Teremia (Zim, Mutare).

I like appreciate what youthzones yesterday they send a bulldozer or (ganda ganda) to umlazi to make a biggest field for JUVENTUS FC we very happy n thanks guys without u we shouldn't Get any o this my are very happy. I'm pass to everyone who think youthzones is fake or is dead that youthzones is alive guys n it make things happens thankx a million to Schalk,doctor,mase,simon n marvin (bobo).

I have just landed in Jozi for the first time, excitement felt by every nerve in my system. I followed the track that was taken by my fellow travelers inside the OR Tambo International Airport, and I simple wanted to know where I can board the next Gautrain to Johannesburg Park Station. I made a quick call to Doc Mabila, just to be sure before an serious decision were made, Doctor confirmed all that I needed to know, and I went straight to a security guard from a distance away, and asked…

When I found out about the Youthzones workshop that I would be part of, I really didn't know what to expect: was it going to be a formal gathering were we all get together and speak of how great Youthzones is, would we be introduced to well booked people who know everything, people who exaggerated real life experiences and made legend of reality, dreamers, or at the furthest extent party animals who did not care much about the actual workshop...

These questions loomed in my head as I…

what a longest weekend for youthzons!!!

Hi guys
I need to update everyone in the world the I was in Johannesburg with deficient youthzones members n were from different province like KZN,mamelody,Soweto.Upington,Mabopane n limpompo etc. We mart each other for the fest time n we came on thursday 21 of june. On thursday night we were share some jokes we were try to get to know each other n we make a big bond.@ night we went to Schalk's house we take a Barth n I was use his towel what I also experience on thursday there is on room… Continue

It began on Thursday morning when I got a call from Marvin Hleko, giving me a call checking if I will make the time to the airport... At the time I was finilising my work at the office as I was planning on being away for the entire weekend...I was overwhelmed with excitement for this particular trip which was my first time going to Johannesburg, my first time taking a ride on the flight and to actually travel on the Gautrain... I just knew this was going to be a great weekend, as I realised…

I'm so trilled to be part of youthzones because, we learn a lot from others and people have passion in everything they do and give it all the energy they have.

these few pass days i met youthzones leaders around SA and we shared a lot and discuss issues that we come upon in our area and challenges we encounter as leaders.

We hosted Kaizer Chiefs Under 17 yesterday afternoon and the game was full of energy and enthusiasm.

The aim of the game was for our players to be scouted by Kaizer Chiefs coaches and at the same time enjoying football at its best. Unfortunately we lost 1-0 but fortunate enough our 3 players were selected and they are going for training at Bosmond next week for their first session with the team.

2 all youthzoners, I hope u ar k, and thumbs up 2 thope who made a change on June 16, and June is a mnth of things coming 2 realty and u can make a change. Lov u all.

My June 16 began in the early hours of the morning, having to get all in place before 07:00 (7am), as we had to leave for Bellville, Western Cape at that time...ensuring that we will be at the Gate before 08:00 (8am), as that is when the program of the day was to start...

"June 16 is a day with bitter memories, but we have to remember and remember to look forward" said Doc Mabila during an event in Intabazwe, Harrismith. 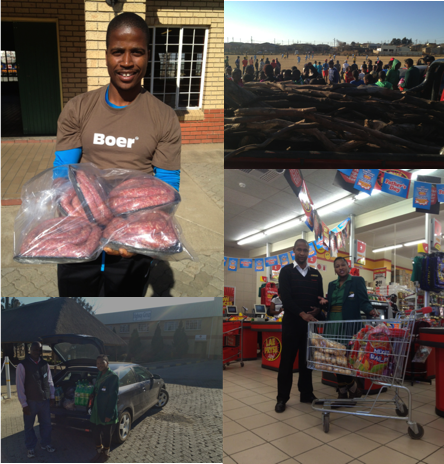 In the picture above, we see how the 'ngamulas' got involved in youth day: some donating wors, others chips and bread, some cold drinks, some fire wood and others meat. We think this assistance shows…

Youthzones receiving modems from IS

Today youthzones received 18 vodacom 3G modems from IS and big thank you to Avesh Inderjeet and Kevin Vandeyar and the crew for making this happen. This will be distributed amongst the rural youth around SA. Youthzones is all about networking and this will make youthzones to network easily. Hence creating hope and friendships amongst the youth. It will definitely make the youth to be more interested in computers since they will be having Internet. This will even increase the level of computer… Continue

Who dares against Evaton Arsenal

I say this with pride and confidence. Evaton Arsenal has no peer on its level. We just won a 4 team knock out tournament and anything thats put on the tabke we chew. ABI and Youthzones knw this for a fact, Josh and Danny of fevertree hav e seen it too. Don't get me wrong, i'm not being cockey, im just proud of the boys.

As a new member to this Im aleady inspired by guys like Ayanda, afriendly guy yet he knows what he is doing, when he speakes to you, you listen aspecially if its something he strongly believes in. He has oppend my eyes in so many ways and thaks to him I can now strongly advise people arround me to see things clearlly.

To me he is a true leader and everyone I have met that has sat down and talked to him confirm this to me. i wish him all the best and support that he can get to become…

She used to sit just outside the library on the stairs where all the diligent and geeky students gathered. She had this school teacher vibe about her, always appearing to be in-tune with her books or deep in thought with something totally profound.