My name is Chris. I met Schalk a few days ago and I'm interested in getting involved in some volunteering.

I'm an avid soccer fan, and it would be great to meet some of you soccer players out there and to get to know you.

I'm looking forward to experiencing and participating in 'Youth Zones'!

CREATING A BETTER BRANDVLEI FOR ALL MEMBERS OF THE COMMUNITY

I am partnering with Siysabulela Foloti in the project of taking young children out of the street of our community by encouranging them to participate in sports. This initiative will help the youth of brandvlei not to be tempted in doing wrong things. foloti and i are so determined in doing that so we joined the campaign of youthzones to assist us in archieving this but for now things are being managede by foloti since im still persueing my career at uj of which it will take me four yes to…

In our site Mabopane we have a problem i wich god  can do something we have a man who is raping last weak he rape grandmother of 91 years and he kill her this weak he rape a child of 5years i wich Police can fine the man,our country is not safe anymore

personality qualities of good leaders could include being emotionally mature,independent,strong-willed,courageous,ambitious and resilient and mental qualities of good leaders could include quick thinking,knownlege,goodjudgement and foresight and effective leadership gain respect,not fear,delegate and observe,analyse defeat in odeat in odear to improve,remember the small things like names and take care of yourself

how i got to know the youthzones

my friend siyabulela told me about the initiative and at first i thought it was just a joke since Mr mabila just told to come where they were situated in joburg near home affairs, we then manage to go there and met all the members as we spent the whole weekend sharing ideas and views on how to change the way our youth behavbing in our communities. for me it was a great experience that i have ever had in my life. I learned that through team work nothing is impossible since the word…

Sports for good my Laureus experience

I would like to take this time to thank Youth zones for giving me the chance to meet with other youth leaders around South Africa. I have learnt so much about myself and the true meaning of being a leader and having people who support in everything you do. Well I am happy to have had such a great opportunity to learn about event planning, facilitation and I.T. Well I have so much to give back to my community and help develop the future generation, and I am happy to be bringing change through…

the little that you do for your community, the small skills you share with your friends and those beautiful amazing kids you coach. keep doing good no matter how small the good deed is after all the size does not matter what matters is the thought you taking initiative and that precious time of yours and dedicating it to better not only them kids but yourself as well. never get tired of doing good someone is watching and the reward will be massive. your beautiful, what you doing is…

EXPERIENCE OF A LIFE TIME 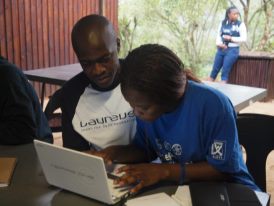 it was a greate pleasure for me to be part of 2013 laureus YES programme, i met other young lads from all over south africa who are coming from different organisation.to my surprise i met a girl named nontokozo from the same organisation that i come from we mingled a little bit even thou i controlled my crazyness along the way,big up to lungi she was always there to answer my…

One of my big frands he use to say''  do your thing because you never know who is watching you I always making show that I,m stikking into this words  to change the life of people general  more expecially in my location (Umlazi),  It a pity because many people they like to help other people because the want some thing among them, It always good to help people in many defferent ways like encourage them, support them if it necessary etc, I, m so happy that we are using this websites to  post…

I was in an accident 2day i had a bad day and thanks God i am OK and the car as well,if you believe in God you mast trust him with all your hart,

today marks the day where some of our young leaders will be attending the exciting life changing experience the LAUREUS YES PILOT PROJECT. NONTOKOZO of "THE GIRLS" in freedom park and RAYMOND FROM mamelodi will be heading to durban this afternoon for the laureus programme i'm so happy and excited for them, and i know they will represent youthzones very well. i hope they take whatever lessons learnt and put them into practise in their communities and their lives. i wish them all the best of…

Is only money, infrastructure, material the solution for African Development?

Does Africa only need money to develop? After hectic past four days ranging from my brother being temporarily arrested in a notorious jail for failing to maintain his baby (being irresponsibly) and had to take him out with large amount before he was killed inside there and of which was not ideal thing to do, beggars in Mozambique crying for help and thats the only thing they know or think can help is when someone gives them money and of which doesn't really help and I always have a heart to…

What a TV can show you

After went to training with friends hungry lions visited my sister to spent the evening with her and catching up with her to my surprise i found her watching supersport when i ask her why she watches that chanel she told me that she like the program because it features the organisations and people who are doing their best to bring change in the lif of young people in disadvantaged communities,while watching with her to my surprise i saw a t-shirt of youthzones when i pay attention to the clip i… Continue

The internship will be for three months, starting July 1, 2013. The successful candidate will be hosted at the centre’s offices in Johannesburg. We will pay a monthly stipend, cover travelling expenses to and from South Africa, and can offer accommodation at a competitive rental close to the M&G’s…

''I BEALIVE THAT,THE YOUTH OF SOUTH AFRICA ARE GREAT AND !!!WE ARE TALLENTED!!!!

Today happy  when I see, where we are caming from  When   you see my pictures today, I,m pablishing the car that is made by the young person  '' this car it move all over all over the sections in  umlazi , '' this car it moves with a patrol, he is  using the old scrab iron, wires, tines touch light, the fun is he moving all over the  places, I, m always happy to see…

arly in the morning we get a bad news in our sites, The lost of Mthandeni '' killer '' mukueana , mthandeni he was a great striker, he use to scoring every single game,(I remember him during 2009/2010 where we was playing league under, lamontville L.FA he was leading goal score by that year where was just played in u/15, ''I remember that year he scored 17 goals in 16 league matchies , He was grea, great player he lived with respect, ' he was respecting mie…