It was a Thursday afternoon while I was preparing for Doc's arrival at Orange Farm on Friday. my son(15 yrs) was robbed blind of all our stock money for our little spaza shop.

See, he was holding forte for me while I was busy with the community trying to Identify families that are hit the most by this Covid-19 pandemic. Families that deserved the food parcels Doc was to bring the following day. I was shocked and angry at the same time when he(my son) came crying accompanied by two community leaders that I work with when they told me the story. Funny enough, one of the perpetrators claimed to know me and my son recognized him from when we used to work at Orange Farm ext 9. We were so lucky Doc was coming to bring us food parcels the following day or else we wouldn't have survived that month.

When the giving of food parcels was done and dusted, It was time to think of a strategy going forward on how to provide for the family in these tough times. It was just before the end of the weekend while I was sitting inside my car thinking and writing while selling sim cards and sweets when she appeared. My mother's daughter. You see my younger sister was living near Calton centre with her boyfriend and son. Because of this pandemic, they were now forced to come and stay in the township as living in the city is so expensive these days especially that both of them were out of work recently.

What was saving grace was that during our exchange of pleasantries, they happen to mention that they own a Gazebo and a popcorn machine. my eyes gleamed with excitement because that was one of the items on our wishlist together with an ice cream maker and a deep fryer for our shop. Needless to say that I jumped into the opportunity to partner with them in the selling of popcorn business. My leverage was that I had experience in selling and my house is a corner house at a semi-busy street.

From then until this Monday, we had raised enough money to buy a few things for our school spaza shop in orange Farm ext 1, as well as transport so you would understand why I was so disappointed yesterday when the president announced school closure again yesterday in his speech. 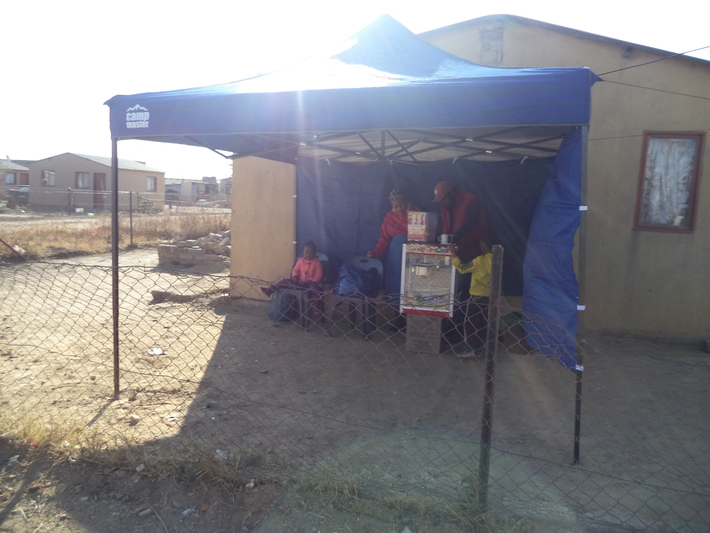