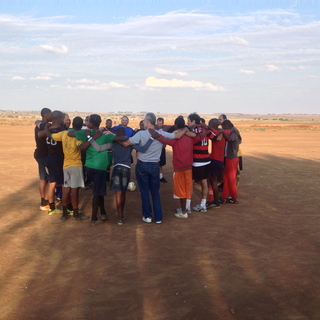 On Friday, 25th of October 2013, seven Brazillians from Rio De Janeiro visited Gabon Informal Settlement and hang out with their South African and Mozambican friends. They were accompanied by Schalk, Super Tom and his two lovely kids and myself. It was so amazing their first time to visit informal settlement seeing the real life in SA. The Brazillians group were just amazing and have great attitude, friendly and when they arrived there they just fitted along. David and Manga also went to use Cryil 's bathroom when they arrive and they didnt complain or look for nearby filling station. Schalk gathered them and briefed them in Portuguese about the place. And then we did an ice breaker of whispering zulu sentence from one person to the other. That was a cracker, worse the Brazillians couldnt even speak proper english and now zulu in their ears. It was fun and then we played football and divided team into two and one team had to take off their shirts and the Brazilllians were the first one to take off their shirts. Amazing! You could see the youth how they loved it in their happy faces. David who used to play pro football in Brazillians showed everyone how good are Brazillians. And we then had a braai whereby every one including the kids, who were more than 130, receive a sausage roll. It was good vibe. And after the senior team sat down in a circle with the Brazillians and we started sharing and asking each other question. One of the amazing questions came from Joao from Brazil asked how do they feel staying in the informal settlement in one word. Some said sad and others say is privilege since it will taught them how to be humble or motivate other when they become rich. Others brought the issue of nyaope is destroying the future of SA and we shared about life in Brazil. Tom's kids also will be at the level of their own especially going to informal settlement and play with the kids and is definitely will be something of good impact in along run. At the end of the day, Brazillians and SA youth were just the same and experiencing the issues and successes in their respective countries. The Brazillians were Sergio Nunes de Assis
,Eduardo Pedreira Jal Fernandez, Alex Rangel, Lael Cantara, Davi P Botelho, Manga,Edson Duque.

I also really enjoyed the day. Everyone was real and cool. My highlight (beside the drunk talkative guy) was the rude kid who kicked and used swear words, in the end apologising to his team.

Comment by Gabon Survivors F.C on October 26, 2013 at 12:33pm
I yho it was amaizing indeed, it was a wow moment, an unbelieveble and unforgetable experience. Thanks to Youthzones and its hard working and dedicated employees, we feel honoured. We are staying at the squater camps but we were with the Brazilians how wonderful is that, everyone was amaized including our parents, they recognized the value of football. Lucky were those who are from Mozambique because they were able to communicate with our brazilians visitors. Daveyton is still shacking and amaized how proud are those who were there, they are saying we were there with the Brazillians, real Brazilians from Brazil. Thanks for making us important people in our community.