Hey leaders of youth zone i like you to help with books of life skill at Mabopane,i am doing life skill program with all coaches of all teams in our Association i jast  net our coaches to develop our children from street and to they teams remember together we can do more  and we are hear to Develop,this program will only run once in a month,it will be any one from Mabopane,Winterveld and from the Community.

Little note to build our nation for our descendants and better worl. Yesterday there was two trespassing suspects who entered our offices and they got arrested. While they were being questioned by the cops, the boss of the building jokingly twice said to me, "tell your friends to leave the property". I didn't take that lightly and I didn't show my emotions but I laughed it off. As I always think in a bigger picture of every small act or encounter it can be to my "rich" friends or "poor" friends… Continue

YOUNG LIONS ARE ROARING TO GO! 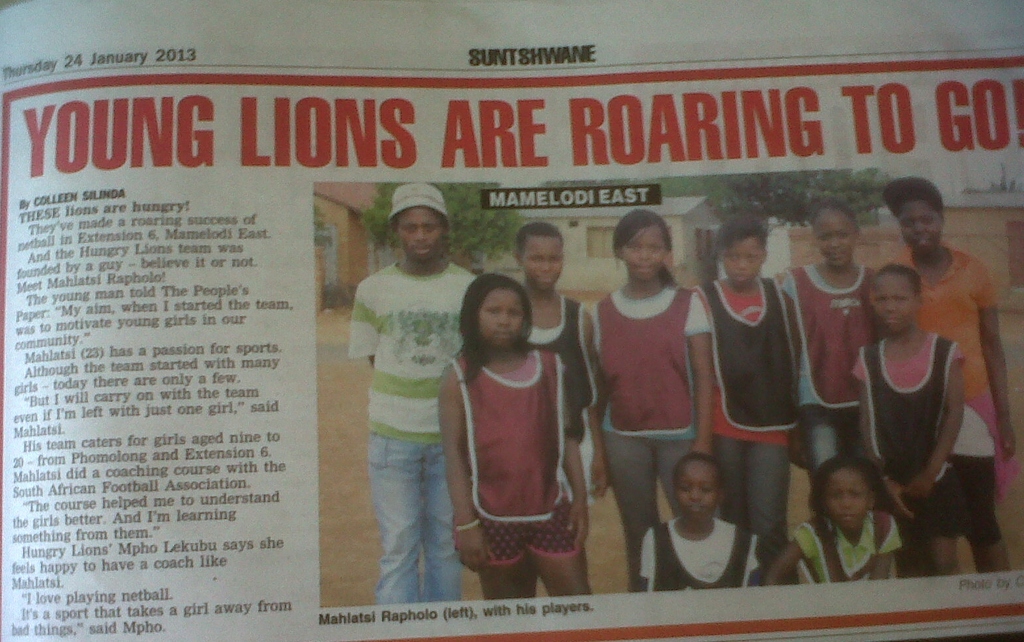 This is the headline that was on today Daily Sun newspaper ,after all the things that we do with this young lads from Hungry lions fc netball division it caught the eye of a pass by journalist who approached us to ask us what motivate us to start what we are doing with this young from a community where drugs and teenage pregnancy is so high and to get girls…

we often don't take pride in the little things that we have we are so blinded by material things and having money that we don't notice what little things we have can make us happy. don't let your worth be determined by the price of your clothes neither where you come from, but take pride in what you have you might be suprised something so little can turn into something big.there are two ways of being rich, 1 is to have all you want the other is to be satisfied with what you have. learn to…

When waiting or dreaming means nothing

Yesterday on the 22nd of Jan 2013, while at work I got a shock of my life when I saw a bumpy, over-driven soccer field in Ikemeleng informal settlement in Rustenburg. But everyone looked chilled and not bothered by the conditions at the start. As we resumed training with our friends, it was a nightmare to train in this field simply because the ball could not be easily controlled, it was just bouncing everywhere and even running was impossible. I also fell hard because I stepped wrongly. But…

Nthonyana Kitsa (Community Development Practitioner) visited the Kameeldrift Youthzone to donate toys to the local creche. The toys were generously donated by employees of Exxaro.… 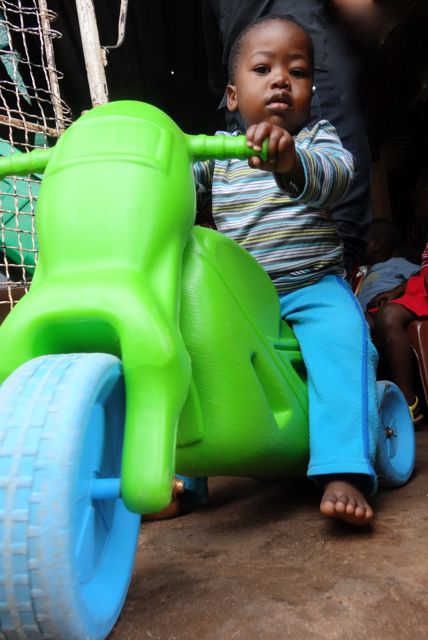 A thought is something that can build you break you as an individual i say this after reading the blogs of doc and tyrone because some people think the world is owing us something whereas only if you can do one thing of believing in yourself and also by taking away that thought out of your mind and do something to make the world a better place,the mind is a very important tool that can be used when you want to achieve something positive in life as the saying goes:

A man can only rise,…

The Hearts and Minds

The Hearts and Minds

There is no hidden secret! Hard-work

This morning on the 18th of Jan 2013, as I was driving to work around 5am I just saw many people jogging and surprisingly the guys in our company who I always see during the day when I am around at the office were already up and working. The IT guy was having a smoke break already at 5h20am. And I keep on seeing upcoming young guys or ambitious youth always admiring these lads and saying they are getting high salaries and living nice life. But there is no secret hidden: They simply work hard…

Visit to the homeless

Life on the streets is harsh and the stress of being homeless is clearly taking its toll.  The event of Christ is the only event in human history that promises relocation and centering, meaning and purpose. This promise and its fulfillment evoke passionate and heartfelt praise and thanksgiving, especially for those aware of their own brokenness and the healing which Christ brings into their lives.

Homelessness does not necessarily entail living on the streets. In fact a comparatively…

At Jozi center with Rooney and Brighten from the UK who arrived at about 13:00 today and Teremai from Mutare who got here at about 10:00 am.

We got acquainted very well and got along. just after resting a bit and having a meal, we went to Park station for bus tickets to Manica. Then went down small street up to Carlton Center where we had a beautiful game of table soccer that got us very excited and energetic.

make this your year!

all things are possible if you dedicate your process into it, to put your dreams infront of people is being rediculed take risks. nothing beats hard work and consistency, make this your year and be the best that you can be..after all it starts with you and how driven you are to be succesful!

Everytime I visit GDM, is not only the place which makes me to be myself and free and feel home but a place which have environment of no-titles, hierarchies, non judgmental attitudes, hospitality, hard working, humility  and above all family. An environment where you see players doing things beyond football which can be gardening, picking garbage, coaching the juniors, making bricks, learning and bouncing back from their mistakes, becoming professional footballers. And above all they are not…

Firstly, let me take this opportunity to say happy new year to  all zones arround the country and outside. i hope we will be with us naku 2013. An expierance that i leans will grows me to be defferant person this year. i also thank to my couligs who always gives me advices . i,m the person that i,m becouse of other pleople thanks toall pleople who makes me strong .all the trips that we having kwi youthzones a makes me strong for facing any challengies this year…

The first day of 2013 well spent reflecting on all the things that i did i the past year and planing my journey in the year 2013,i learned many things in the past year that really changed my life to the better and i managed to transform the life of other people.in the year 2013 with the lesson i learned i want to grow as an individual and also change the life of other people.
2013,creating a better mzansi through sport and development one love

This year, 2013 is Gods way of saying one more time, change one mind, touch one heart and inspire one soul.

HAPPY NEW YEAR TO ALL ZONERS AND THEIR FAMILIES.

(sent to me by a friend: Xolisa Gazi. Thanks bro)