After seven months of patience and learning from each other, the ABI Umlazi Juventus FC were ready to interact and share with other youth around SA. On Friday, the 13th of April 2012, Juventus FC visited Dangerous Darkies FC in Intabazwe informal settlement in Harrismith. The main aim of the exchange was learning from each other and training in terms of how each team operate and how they become successful, not only in the football field but in life generally. It could being a chef like Mzi of Juventus, or Ayanda, computer technician etc. I must say everything went well from the beginning until the end. The youth from Umlazi arrived 10h50 where they were welcome with smile and joy by the coach of Dangerous Darkies, Thomas, and few players. Both teams went to pick 'n pay and buy food together and giving each ideas what to buy and making jokes inside the shop just from the start and some of the players of Juventus went with Schalla to the township. From there we all went to the township to join Schalla and the rest and to find Schalla already sharing with the lads something on the computer. We all then went to the field where each individual introduced oneself in a circle and interesting each person has to say something about themselves. Funny things were said for real from I have big head, I like eating etc. And very interesting Schalla made a bet where he asked randomly one player from the host and one from Juventus FC to come into the circle. He then put R50 on the floor and asked the visitor if he will remember what the host said about himself. And he couldn't and instead he blamed the host that he was speaking in Sotho. But the second player from the visitors managed and won the R50. And very interesting, the second player gave the money to the first one who lost and said e will share it. Team spirit, right there! We never know if we are missing the luck of our life to any stranger we meet. And then each player from the host took a player/s from Juventus FC for walk around the settlement before kick off. The game went well where both teams warmed up together and I played for Umlazi Fc and Schalla for the hosts. The visitors displayed good football during the first half and the hosts bounce back in the second half and ended up winning 5-2. After everyone came together where Ayanda Mbatha of ABI Juventus FC handed over the trophy to the winning Dangerous Darkies. We then had a braai where it mingling, joking, sharing contacts etc. I want to say big thank you to ABI, above all and my teammates/colleagues for making this possible. 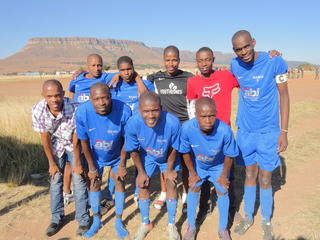